Since March 14, 1870, when Bettie Locke, Alice Allen, Bettie Tipton, and Hannah Fitch first wore their new badges to chapel at Indiana Asbury, the kite-shaped pin has been a symbol of membership in Kappa Alpha Theta Fraternity.

The final design for those first badges was simple but elegant. At 1 inch by three-quarters of an inch, they were slightly larger than the current standard badge. The badge of 1870 contained many of the markings found on today’s badges: the white chevron with the Greek letters and two stars. In that first design, a chased border edged the badge.

Once she had designed it, Bettie sought a jeweler who made other fraternity badges. John Newman of New York was contacted, and in his response, he first addressed Bettie as "Sir." We do not have Bettie's response, but he does refer to her as a "Miss" in his next letter. 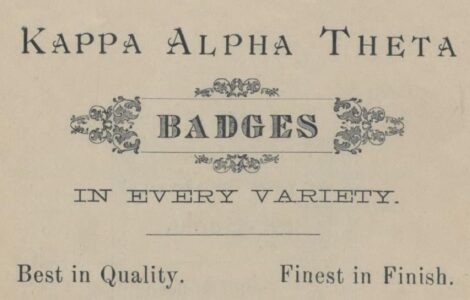 For the first 11 years, the official jeweler was Newman & Company of New York. However, members would often go to local jewelers and get their own version of the official design. Found in samples in the Theta archives, the edging changes from a chased border to a rope or bead edging. Some members commissioned more ornate badges with combinations of pearls, diamonds, rubies, garnets, emeralds, and opals decorating the edge of these early badges. As new chapters were established around the country, the Fraternity named more "official jewelers." By 1896, seven official jewelers were located around the country.

Grand Convention eventually passed legislation regulating the design of the badge. In 1889, the Constitution & Bylaws specifically stated that Newman & Company's die was to be used in production of all badges. In 1899, a formal description of the badge was included in the Constitution & Bylaws. In 1907, an attempt was made to standardize the design using only pearls or diamonds, but this effort failed. Legislation in 1909 reduced the size of the badge to 1 inch by two-thirds of an inch.

An Official Jeweler Is Chosen

Finally, in 1915, one official jeweler, Balfour, was chosen. With this move, the days of great variety in badge design were over. Occasionally, other jewelers unofficially made Theta badges. The C.B. Dyer Company of Indianapolis was known for its badges featuring long, extended points, but these were never official.

Through the years, gentle reminders in The Magazine addressed proper use of the badge. In a 1904 issue, members were asked not to use badges "...to supply the missing link in a cuff, to fasten a stock, to pin a belt securely, or even to clasp milady's stray scolding locks." In 1907, Grand Convention passed legislation that restricted the use of the badge design to the badge itself. Members and chapters were not to use the badge design on any other type of jewelry, hat pins, stationery, or other items. The members were asked repeatedly to not go overboard on any decoration on the badges themselves. 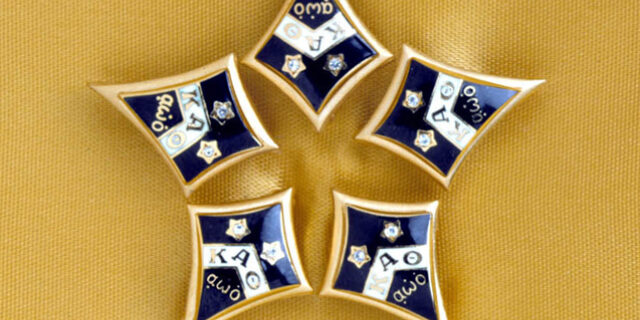 From standard plain badges to badges with jeweled borders, from gold-plated to white gold, Theta badges can be personalized in many ways. All badges are engravable with the member’s initials, date of initiation, and chapter name. Except for the standard plain badge, all badges come in a small and large size. Guards, dangles, and pin-on pendants are available.

To help members bequeath badges appropriately, members can place the Badge Disposition Form (below) with badges (and other Kappa Alpha Theta items!) to ensure they find a good home in the future. Theta will consider special requests expressed by those returning badges. The most common consideration is donating the badge to the member’s chapter for use as a chapter officer's badge or special award badge (e.g. a scholarship badge) or to be given to a member who cannot afford a badge. For many years now, new members receive a badge at the time of initiation, and there may already be a badge designated for the officer or award requested. Theta archives staff will contact the chapter to determine the best placement of the badge.