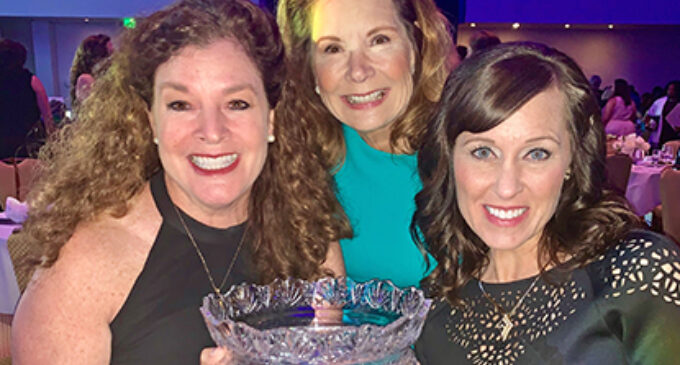 National Court Appointed Special Advocates Association (National CASA/GAL) awarded Kappa Alpha Theta with its prestigious Children’s Champion Award at the annual CASA/GAL conference in early June. Thanks to donations from Thetas all over the world, Theta Foundation granted $1 million through its National CASA Initiative; these funds will not only directly and positively impact CASA children but will also help National CASA secure its position as one of the most influential and effective child welfare leaders in America.

The Children’s Champion Award is given to an individual or organization who has made a significant contribution at the national level to improving the lives of children who have experienced abuse or neglect. This award has historically been given to a member of Congress but has been awarded to Kappa Alpha Theta for our 30 years of steadfast commitment to ensuring that every abused and neglected child has the opportunity for a safe home, to establish permanence, and be provided opportunities to thrive.

In 2016, when Theta Foundation committed to raising $1 million for National CASA, only one in four children supported by CASA/GAL programs had a Theta chapter in their community. Through this unprecedented initiative, we’ve been able to widen the impact of Theta’s support by helping to provide National CASA with the resources it needs to become evidence-based and ensure the best possible outcomes for children—even those without a Theta college chapter or alumnae group nearby.

Through fundraising millions of dollars, volunteering at local and national levels, and even becoming CASA volunteers themselves, Thetas all over the world have demonstrated their commitment to the value of CASA and the difference CASA volunteers make in the lives of our nation’s most vulnerable children.

Theta Foundation staff is pleased to offer the following opportunities for candidates who are completing the 2023 Scholarship Appl...

Why YOU Should Apply for a Theta Foundation Scholarship