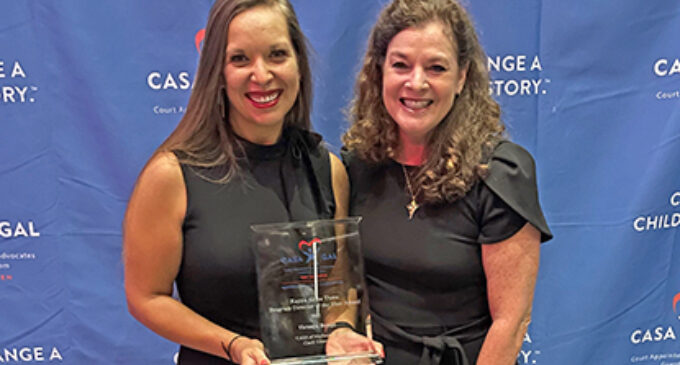 I recently had the chance to attend the 2022 Annual Conference alongside Theta Foundation’s Executive Director, Kelley Hurst. This was the first in-person conference experience in a few years, and there was no shortage of connection or inspiration to be found. The conference brought together CASA/GAL local program and state organization staff, board members, and volunteers, making for a meaningful event that allowed everyone in attendance to enhance their knowledge, deepen their understanding of relevant issues, and discuss promising practices that will advance the CASA/GAL mission.

Of note, Kelley had the privilege of presenting the Kappa Alpha Theta Program Director of the Year award during the main event: the Awards of Excellence luncheon. This award is given to someone who has taken significant actions to establish or expand a local CASA/GAL program, and this year’s recipient has done just that and more.

Victoria Benge was hired as executive director in 2018, when CASA of Madison County (Kentucky) was at its lowest point. She started her acceptance speech with the following: “I will never forget January 29, 2018. I had gotten my dream job as executive director at age 26. When I walked into the office that first day, everything was still in boxes, furniture needed to be made, and the one part-time employee notified me she was quitting. The program was at a point where no one wanted to be associated with it and everyone was waiting for it to fail once more.”

Fast forward to today: CASA of Madison and Clark Counties is a respected, thriving entity that has expanded its reach. It has grown from 5 to 79 volunteers and from 8 to 147 children served. Donations have increased by 1,000%. Through her dedication and tenacity, Victoria has ensured the program has a prominent seat at the table in every conversation and discussion regarding the child welfare system in her community. There was not a dry eye in the room as the crowd rose to their feet to applaud this young, vibrant leader.

Throughout the conference, I was struck by the number of people that would recognize the "Kappa Alpha Theta" name and stop to chat. We had program directors swing by to sing the praises of the local Theta chapter that supports their program with both time and treasure. We had Theta alumnae hurriedly rush over to tell us how they first learned about CASA/GAL through their Theta experience and now serve as CASA volunteers because of it. The number of people who simply came by to tell us "thank you" was truly heart-warming. It was a tangible reminder of why we chose CASA/GAL as our philanthropic partner and why we continue to support their mission and vision.

One of the final awards to be given out during the awards luncheon was the G.F. Bettineski Child Advocate of the Year award. The award was given to Carolyn Muscari. Carolyn has served as a CASA volunteer for 40+ years – the duration of National CASA/GAL’s existence. As she accepted her award, she spoke about the emotional toll being a CASA volunteer can take. I will never forget her closing sentiments. She said that she felt bad for these children, but there are plenty of people who feel bad for them. These children don’t need people to feel bad for them; they need people to help them. That is what a CASA/GAL volunteer does.

When it comes to Theta Foundation scholarships, there are some common myths we’ve heard over the years that might discourage someo...

Theta Foundation staff is pleased to offer the following opportunities for candidates who are completing the 2023 Scholarship Appl...