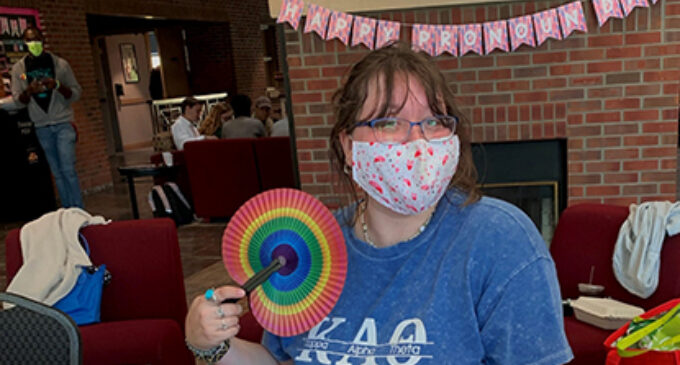 This past spring, Gamma deuteron Chapter received Ohio Wesleyan University’s (OWU’s) Community Impact Award for its work in creating and promoting International Pronouns Day on the OWU campus. International Pronouns Day is recognized the third Wednesday of October and, according to the group’s website, the day “seeks to make respecting, sharing, and educating about personal pronouns commonplace.”

Veronica (Roni) Cody, Gamma deuteron/Ohio Wesleyan, organized the campus event on behalf of their chapter and was recognized by the university for their efforts.

Roni shared more about how they organized the event for the campus community:

“As Gamma deuteron’s chief diversity, equity, and inclusion officer, I worked with Ohio Wesleyan’s Office of Multicultural Student Affairs (OMSA), which houses the Spectrum Resource Center for LGBTQ+ students and the Women’s Resource Center (WRC). We were predominantly focused on community outreach with this event for the entire OWU community. We tabled in the campus center for gender inclusion and sexual health. We prepared for this by having members of the chapter get together and make pins that had an assortment of pronouns including, but not limited to, she/her, he/him, they/them, and zi/zir. While tabling, we also had the option for people to make their own pins and include other pronouns or a combination of pronouns that would best fit their identities. The WRC included pins, condoms and other sexual wellness items, as well as information about OMSA and WRC."