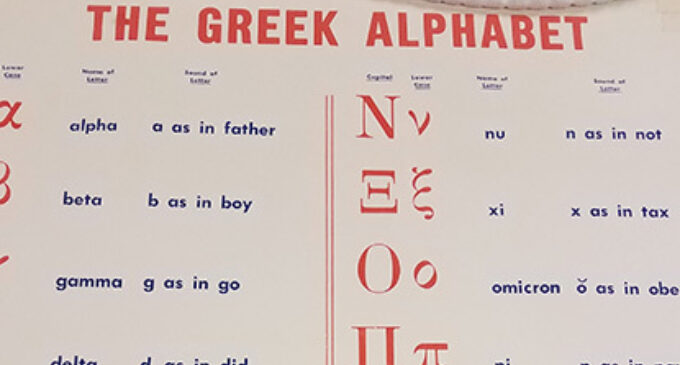 If you’ve watched our new video “Our College Chapters” or browsed our College Chapters History page recently, you might notice that the chapters do not always appear in Greek-letter order. Instead, the chapters are listed in order of establishment. As with any group that has been around for 150 years, sometimes things get a little … well … out of order.

There are several reasons why the Greek-letter order of college chapters does not represent the actual establishment order. Sometimes a chapter received its Greek name but was not installed until after the chapter that followed it in alphabetical sequence. Hence, the chapter with an “earlier” name has a later installation date.

We must also take into account a change in the chapter-naming process itself. When Theta was first organized in 1870, the chapters were named first by the state in which they were located and then by a Greek letter. Hence: Indiana Alpha, Indiana Beta, Ohio Alpha, Ohio Beta, etc. (Some fraternities and sororities still use a naming structure like this one.) By 1897, Theta had transitioned to a straight Greek-letter naming system, but we did not rename some of the closed chapters and, in fact, did not realize that we had overlooked completely some of the early chapters that did not exist for very long.

In a rather unusual case, when the chapter that had been Ohio Gamma was reestablished at Ohio Wesleyan in 1924, it was designated Gamma deuteron: combining the Gamma from its original name with deuteron. Deuteron means second and was added because the Gamma Chapter at Butler was already established.

The Phi deuteron/Stanford story is another complicated one! The chapter was established originally at the University of the Pacific in 1889, but when Stanford opened “down the road” and Pacific struggled with enrollment numbers, the chapter charter—along with the chapter name—was transferred to Stanford in 1892. When women's groups were banned at Stanford in 1940, the Phi chapter name was no longer active. Then, in 1959, Theta reestablished a chapter at Pacific and restored its original name: Phi. When Theta returned to Stanford in 1978, they, too, wanted their original name and so were designated Phi deuteron. Who knew it could be so complicated?!

As part of Theta’s 150th anniversary, we want to recognize the original installation date of our chapters. Most of the changes are in the early part of the listing. There are a few minor adjustments in the later years. We won't be changing chapter names to reflect installation order, but by listing them this way when we are referring to the historical formation of college chapters, we can better understand the development of Theta.