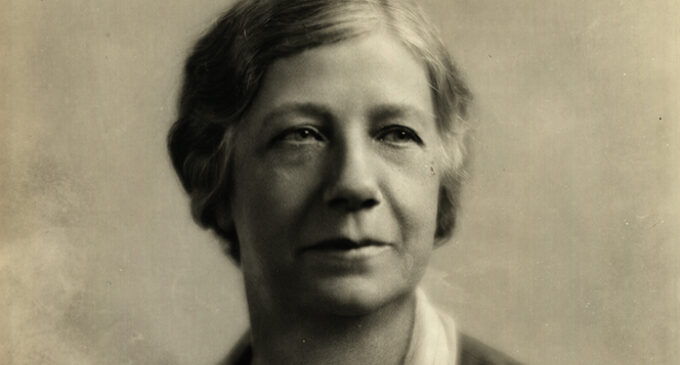 Theta and the Suffrage Movement

The May 1915 issue of the Theta magazine, titled the "Women Progress Number," stated on its editorial page,

“The issue was planned to arouse in our membership, especially the undergraduate, an appreciation of the opportunities and privileges we take so much as a matter of course, but which actually are ours because of the unselfish effort of former generations. Freely we have received, equally freely we, the college women to whom has come the greatest heritage, must give of ourselves until opportunity for full development is open to every human being.”

The lead articles—Woman as a human being," "Education of Women," “Women’s rational development," "Principles of equal suffrage," and "Expediency of votes for women"—all spoke to the need for women to participate equally and develop their interests fully, and suffrage was a path for that to happen.

On August 26, 2020, the United States celebrates the ratification of the 19th Amendment, providing for women to vote in national elections. The campaign to grant women the right to vote had begun almost 100 years earlier with the Seneca Falls Convention in 1848. In the years between 1848 and 1920, individual communities and states had granted suffrage to women but not at the federal level. The campaign accelerated in the 1910s and culminated with the 19th Amendment passed by Congress in June 1919, and ratified by the required two-thirds of states by August 1920.

The suffrage movement encompasses Theta’s beginning in 1870. We don’t know the specific stance that the four founders took on suffrage, but tucked away in Bettie Locke Hamilton’s papers is a clipping from the December 1870 issue of the Greencastle newspaper about the DePauw’s Young Ladies Literary Society inviting Elizabeth Cady Stanton to speak, something Bettie saved over the years. Stanton had been an active abolitionist prior to the Civil War and became a leader of the women’s suffrage movement. We know that most of the founders were active in the campus literary group and when Stanton spoke in Greencastle, we can imagine that most likely the four founders as well several of the early members of Alpha Chapter were present for that speech.

Over the years, alumnae and collegians participated in the effort. Collegians joined through the College Equal Suffrage League, an organization created in 1900 aimed at younger women. Chapter letters in the Theta magazine reference Thetas joining their local campus group. Jessie Baldridge Lebrecht, Kappa/Kansas, Fraternity president, 1924-1928, served as president of her campus group in 1909.

With the renewed push to pass national suffrage, the pages of the Theta magazine in the 1910s included articles about voting and references to members involved with the suffrage movement. Several Thetas actively participated in the national movement.

After ratification, numerous Thetas worked with the League of Women Voters at the local, state, and national levels.

In the January 1913 issue, Lillian Manker Allen, Omicron/USC, wrote in "Experiences of a New Voter" of her progress from being skeptical of women voting to becoming a voter herself (western states granted women suffrage in state elections much earlier than other parts of the U.S.). Her article took the reader through her own personal experience of voting for the first time. She concluded, “There is something rather exhilarating in the consciousness of being a factor in affairs of public importance.”

As we mark the 100th anniversary of ratification of the 19th Amendment, we look back to see where we were, how far we have come, and how far we still need to be. The 1915 issue “Women Progress Number” stated, “Freely we have received, equally freely we, the college women to whom has come the greatest heritage, must give of ourselves until opportunity for full development is open to every human being.”

Numerous Thetas participated in the suffrage movement in their communities that have yet to be discovered. Check out your local communities’ articles and exhibits to see if you can find a Theta. For information about your own community, visit www.2020centennial.org. Let the archives know if you find a Theta!