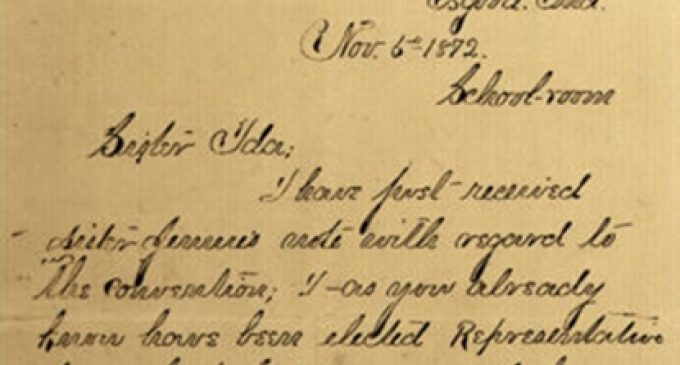 The Business of Convention: 150 Years Ago

“As there is other important business that should be brought up before all the chapters, it was moved and carried that the Thetas hold a convention, and that each chapter send a delegate to present the business of her own particular chapter.” Minutes, Alpha Chapter, Indiana Asbury, Oct. 11, 1872

With that decision, our earliest members established the practice of conventions, or as it would eventually be called “Grand Convention,” to discuss the business of the Fraternity with representatives first from active college chapters and later from alumnae chapters. This responsibility was not only to take care of administrative matters but also to discuss how the Fraternity would move forward.

Unlike present day Conventions, where months of advance planning are necessary to organize and prepare for a successful event, that first convention only took a few weeks. Several letters were exchanged between the three active chapters – Alpha/Indiana Asbury (later DePauw), Beta/Indiana, and Indiana Gamma/Moores Hill – to arrange the time and day. On Thursday, Nov. 14, 1872, Beta/Indiana hosted the first Theta Convention in Bloomington, Ind. Twelve Thetas were present at this convention – two delegates from Alpha Chapter (Hannah Fitch, and Mary Stevenson) and ten members of the Beta Chapter. Alice Brewer, the delegate from Indiana Gamma, was not able to attend.

Here was a group of women who were looking to the future of the Fraternity. Think of it. This convention was held only a little over two and half years after the founding. By November 1872, five chapters had been established but only three were active. There was a total of 46 members initiated by this point fraternity-wide. Yet these members believed it was important to gather to discuss how to move Theta forward.

The group decided to issue charters on parchment, with a charter fee of $5 (about $119 in today’s dollars) to help cover the expenses. They considered “that chapters in female colleges do not prosper” because of their experiences at Cincinnati Wesleyan and Millersburg College and decided not to establish chapters at women-only institutions. According to 60 Years in Kappa Alpha Theta, Beta Chapter members made additions to the initiation ceremony. Delegates also discussed establishing new chapters at Antioch College, Illinois Wesleyan, and the University of Michigan. It took a few years, but chapters were installed at the last two schools, Delta 1/Illinois Wesleyan in 1875 and Eta/Michigan in 1879.

The setting was not a hotel or resort but in a member’s home. According to the few records we have about the 1872 Convention, Beta Chapter member Margaret Dodds hosted the convention at her family’s home in Bloomington. Alpha’s delegate Mary Stevenson stayed at the home of Elizabeth Hughes, a member of Beta Chapter who had just been initiated a few days earlier. Mary reported, "We had a grand time socially, I remember. I was entertained at the home of the Misses Hughes, where we were in a continuous reception while in the house. We gave one morning to business. The evening was given to a party, much like any other party of fine folk. The weather was cold, and we got home late. I shall not forget the warm iron the motherly Mrs. Hughes had placed in the foot of my bed. It saved my life."

Over the 150 years since that first convention in 1872, Thetas have met almost every two years in locales in the U.S. and in Canada, and even once in the Bahama Islands. Through college and alumnae chapter delegates, Theta has met the varied challenges presented by changing membership and society. Their task is to represent their chapters and carefully consider the needs of the Fraternity while looking forward. In the minutes of Alpha Chapter after the 1872 Convention, it was reported that “the opinion was held that the convention had acquitted itself well.” As our current slate of delegates prepare for the upcoming Convention this summer, we look forward to being able to say the same: “the convention has acquitted itself well.”

Visit the Heritage section of the Theta website to learn more about conventions past.